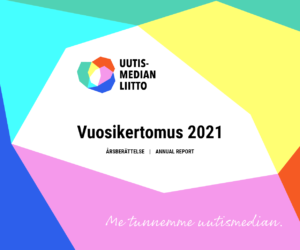 The first operating year of News Media Finland and the 113th one in the history of the newspaper publishers’ federation was full of action and good spirits. We had already grown accustomed to the continued emergence of new pandemic waves, and all the association’s activities were carried out remotely, with hybrid arrangements and partly even physically.

Along with the rest of the media industry, news media rose from the sharp drop in advertising revenue in spring 2020. In 2021, more than 13 per cent more money was used for media advertising in Finland than in the previous year. In the press, the total increase in advertising was nearly 9 per cent. Digital advertising in the press increased by nearly 24 per cent. The digitalisation of reading also continued.

The recovery of the economy and the strengthening of the confidence in the future were reflected in many media companies’ new recruitments and product launches.

As a continuation to the COVID-19 support for journalism, we actively participated in the preparation of a more permanent media support, but the proposal of the Ministry of Transport and Communications did not receive government funding.

We supervised the interests of news media in decision-making in both Finland and the European Union regarding, for example, the preparation of the Postal Act and delivery support, reduction of value-added tax on newspapers and periodicals, reform of the Act on the Finnish Broadcasting Company, reform of the Copyright Act, regulation of telemarketing and preparation of the new EU digital regulations.

We were actively involved in the international representation of the interests of news media publishers, above all at the European level.

To support the development of our member companies’ business operations, we produced statistics, surveys and analyses probing future prospects.

The materials we produced to support the reader marketing of our member newspapers, Kyllä minä selviän (“I will survive”), served as a reminder that news media not only provides the latest news, but also offers different perspectives, peer support and windows to different forms of humanity every weekday. On World Press Freedom Day, we highlighted the responsibility of the speaker for their words and for the actions generated by the words.

Newspapers and free newspapers were in the top positions when we surveyed the importance of media outlets in providing support for voting decisions in both the municipal elections and the first county elections. Our Aluevaalit 2022 (“County elections 2022”) survey was one of the first surveys to reveal that voters did not have a very good understanding of the purpose of these elections.

The Newspaper Week was renamed News Week in the wake of the association’s name change. During the week, we highlighted the importance of reliable information and responsible journalism. The slogan for the week was “Väärä tieto leviää nopeammin kuin mikään virus” (“False information spreads faster than any virus”). The Nuoret, uutiset ja luottamus (“Youth, news and confidence”) survey, published during the News Week, revealed that news is an important part of the everyday use of media of young people aged 13 to 18.

We produced several new education materials for schools and educational institutions to support media education. In addition to children and young people, we extended our media education activities to adults and to the education of special groups.

The cost and reliability concerns related to the delivery of printed newspapers and the digitalisation of media use encourage free and local newspapers to look for their own digital path.

During the pandemic, local newspapers played an important role as sources of fact-checked information and providers of a forum for safe discussion. The nation’s news was suddenly in the same way very local, and people had a great need to follow the news coverage on the subject.

The Pureudu paikalliseen (“Focus on local”) media education material, born out of the initiative of free and local newspapers, inspired people to look close and familiarise themselves with the local news media in their area.

The prizes for the best free and local newspapers were awarded at the Vuoden parhaat (“Best of the Year”) gala at the Suuret Lehtipäivät event in Seinäjoki.

Suomen Lehdistö was renewed at the beginning of the year: the format of the periodical was reduced to magazine size, the appearance became more colourful, articles on people working in the industry were sharpened and the development of foreign, particularly Nordic, media were given greater prominence.

The number of visitors to our website jumped by 80% compared to the previous year. At the end of the year, we were preparing to renew the website.

The wide range of the association’s training sessions was mainly organised as webinars. The culmination of the year was the highly popular live meeting at the Suuret Lehtipäivät event in Seinäjoki in November, conveniently just before the spread of the omicron variant and the ensuing new restrictions. The training sessions we organised reached more than 1,700 people during the year.

Our experts also provide legal advice to our members and help them with any concrete questions that may arise in the everyday life at the editorial office. In the spring, a member company, our lawyers and the communications department worked together to turn the issue of the sharing and copyright of newspaper articles into a material titled Jos haluat jakaa lehtijuttuja, tee se oikein (“If you want to share newspaper articles, do it correctly”). Our members can use the material to remind people of the principles of sharing articles across their publishing channels.